The Risen3D launcher is fully featured and is included in the Risen3D distribution - please take the time to read the Launcher documentation.

The Risen3D launcher is a smart launcher, analysing  wad requirements prior to launching. You do not have to specify an iwad or map number,
you can even launch a saved game or launch directly from installed game list from any location on your PC.

Say you have a game called mywad.zip which contains the files - levels.wad, resources.wad, cool.ded and mywad.deh. The launcher will load
these files in the correct order, using the correct iwad, starting at the correct map with just one click of the mouse. The launcher also has a
shortcut creation option for storing shortcuts in a Desktop folder or a Start Menu shortcut group.

There is a choice of two launcher styles for what better suits the user status, novice or advanced user. 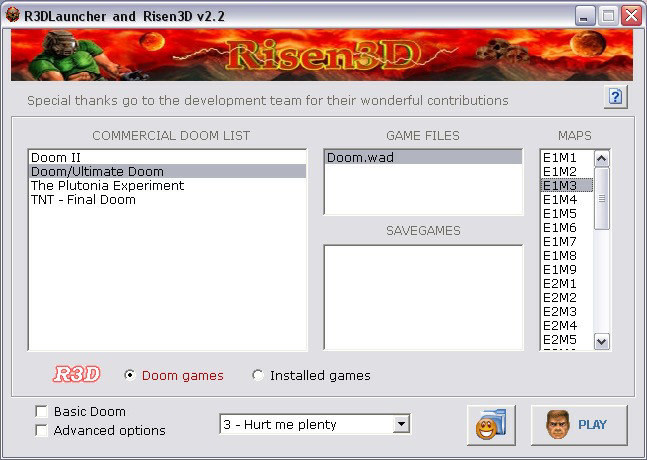 Getting Started with the R3DLauncher

When you first run the launcher you may be prompted to setup your iwad ( commercial doom wad ) locations, if however you are already using a
Risen3D Compliant iwad structure or you have the DOOMWADDIR environment variable set you will not be prompted. If prompted it is essential that
you provide your preferred locations. If in any doubt just locate your iwad(s) in the same folder you installed Risen3D.